16 Historic Sites in Ann Arbor Every History Buff Should Visit

Ann Arbor was founded in 1824, named for the wives of the village’s founders (named Ann) and the sheer amount of local bur oak trees. But it wouldn’t be until the University of Michigan moved here from Detroit that the city rapidly started growing.

Since then, A2 has become a destination for education, beautiful homes and exciting outdoor pursuits. And since May is Historic Preservation Month, we thought it might be nice to outline some of Ann Arbor’s most interesting historic sites. Below, you’ll find the location of some of our favorite pieces of history throughout the city along with some information on where they came from. Read through to learn more about the people and buildings that made Ann Arbor the incredible city we know and love today!

In the early 1880s, the citizens of Ann Arbor decided to replace their wood-frame firehouse with a new fireproof building. In May of 1882, the city aldermen selected the plans of William Scott and Company of Detroit and the following year completed the Richardsonian Romanesque building. While it is now home to the Ann Arbor Hands-On Museum, you can still spot the building’s historic bricks, engine portals and bell tower on East Huron Street.

While The University of Michigan is packed full of historic buildings (we’ll discuss them more later), one of the most iconic is the Delta Upsilon Fraternity House. This gorgeous, Tudor-Revival mansion was created to house the famous fraternity in the early 1900s. It was designed by Detroit architect Albert Kahn and is one of the earliest surviving examples of his non-industrial and non-commercial designs.

The First National Bank, which was established in 1863, was the first bank in Washtenaw County. The iconic Romanesque Revival building finished construction in 1930, becoming the tallest building in the city at the time. Some of the more unique features include the lightly colored terra-cotta and several gargoyles mounted near the top.

Robert S. Wilson was an attorney (and eventual member of the Michigan House of Representatives) who moved from Allegheny County, New York, to Ann Arbor in 1835. His historic home, which features Greek Revival architecture, was built in 1839 and he lived there until 1850 when he relocated to Chicago. The home, which you can still drive by today, features four columns rising through two stories and has been singled out on countless surveys of Michigan architecture as an outstanding specimen of Neoclassical design.

The Kempf House Museum, built in 1853, was home to the Kempfs, a busy German-American Family who lived and worked here in the 1890s. This Greek Revival house is a unique resource because of its national architectural significance, downtown location, and the distinguished contributions of the Kempfs to the musical culture of Ann Arbor. Today, it is home to the Kempf House Museum, a nonprofit organization dedicated to preserving, interpreting, and celebrating the Bennett-Kempf house, its garden and collections. 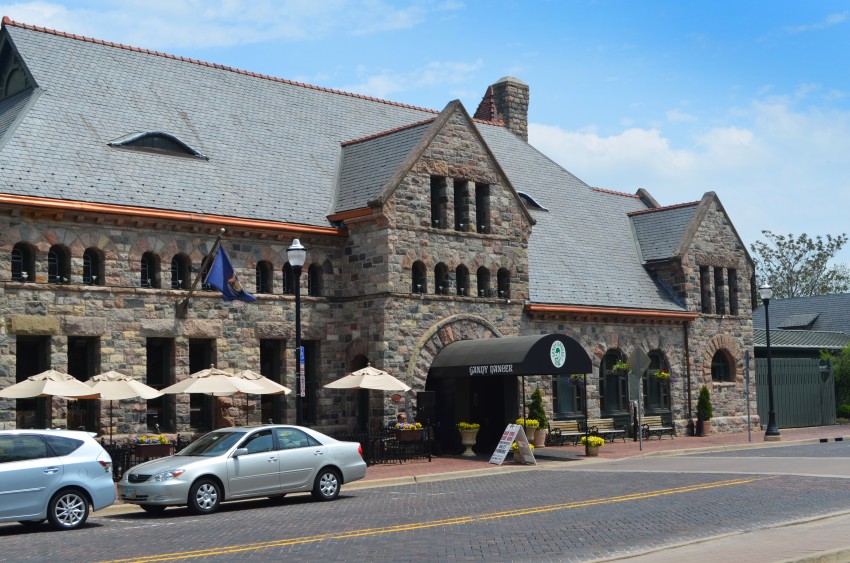 The historic Ann Arbor Station, also known as the Michigan Central Railroad Ann Arbor Depot, was once the center of travel and shipping in the area. But by the 1960s, due to the rise in automobile sales, passenger train travel had slowed to a trickle and in the 1970s the railroad sold the station to restauranteur Chuck Muer. Today, you can dine inside the historic building at the popular Gandy Dancer, a destination for great seafood in Ann Arbor.

Opened in 1928, the Michigan Theater was hailed as “a Shrine to the Arts.” Detroit architect Maurice Finkel designed an outstanding silent film exhibition theater appropriate for a town with a world-class university at its core. The Michigan Theater contained a fully functioning stage, a sizable orchestra pit, an elaborate Barton theater organ, grand lobbies, and over 1,700 seats, all designed around its core capability of being a theater intended for film exhibition. The Michigan Theater is still an integral part of Ann Arbor’s cultural scene. Click here for information on their current showings!

Northern Brewery was one of Ann Arbor’s first breweries, started by George Krause in 1872. Since then, it has also been an ice business, a creamery and a foundry. Today, the same building is the home of the Tech Brewery, a coworking space that gives individuals who work from home, freelancers or small start-ups a place to collaborate. 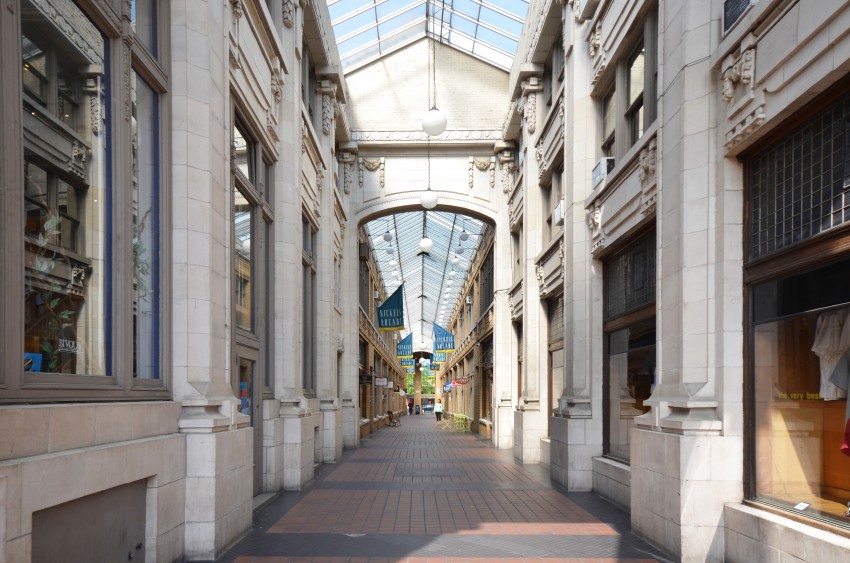 Located in downtown Ann Arbor and adjacent to the University of Michigan campus, Nickels Arcade is home to some of the best cafes and shops in town. Now over 100 years old, the covered mall consists of a three-story, three-bay open portico flanked with store and office blocks. Click here to explore some of the shops that currently reside in this historic building!

The Old West Side Historic District is a neighborhood and dedicated historic district whose architecture, streetscape, history, and environment are especially characteristic of 19th century midwestern America. The neighborhood is currently maintained by the Old West Side Association, which provides walking tours and events in the area.

In 1824, Robert Fleming built one of the first mills on the Huron River system—a sawmill on what is now known as Fleming Creek, near the Botanical Gardens. This set the stage for Fleming and the Huron becoming an important source of power for the first European settlements in the area. After the Fleming Creek Mill was torn down due to disrepair, it was replaced with the Parker Grist Mill, which you can still stop by and see today. Parker Mills Country Park is also home to the Fleming Creek Bridge, a cider mill, hiking trails and more.

With its steep slate roof, stone walls, and pointed stained-glass windows, St. Andrew’s Episcopal was designed to look like a church out of the Middle Ages. It was actually built in 1868, but it is still Ann Arbor’s oldest church, coming up on its 153rd birthday this year.

Dedicated in 1845, the gorgeous St. Thomas the Apostle Church is a parish of the Roman Catholic Church on Elizabeth Street. It was designed in the Richardsonian Romanesque style by the Detroit architectural firm of Spier & Rohns. When visiting, church-goers are greeted with a beautiful clocktower, soaring ceilings, stained glass windows and a statue of St. Thomas straight from Padua, Italy. 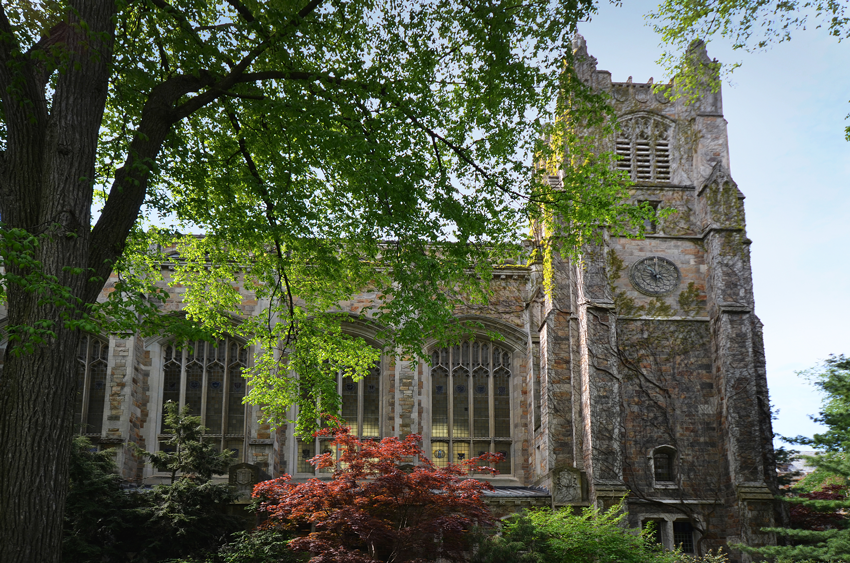 We couldn’t create a list of Ann Arbor’s most iconic historic sites without spending some time on the University of Michigan! Founded in 1817 as one of the first public universities in The United States, it’s no surprise that some of Ann Arbor’s most historic buildings can be found throughout the U of M campus. The Michigan Union, Mason Hall, William Clements Library, the Burton Memorial Tower, the Kelsey Museum of Archaeology, the Detroit Observatory, The University of Michigan Museum of Natural History, the University of Michigan Museum of Art, the Gerald R. Ford Presidential Library, the Sindecuse Museum of Dentistry—we could go on for hours. If you have time, we highly recommend checking out this long list of university buildings and taking a walking tour of the campus yourself!

Pioneer John Anderson purchased Pittsfield Township farmland in 1831, but it was his son William who erected this still-standing, small Greek Revival home. As the first Washtenaw County sheriff, William Anderson had carried on a public feud with Probate Judge Robert S. Wilson, who built a larger Greek Revival house on Division Street (which we discussed earlier on this list!).

Ann Arbor is a city so steeped in history, it’s likely that we missed a few important historical sites. If we left out your favorite historic spot in A2, let us know in the comments below!