Michigan is full of big, incredible things. For example, the Upper Peninsula boasts nearly a thousand miles of shoreline on Lake Superior, the World’s Largest Freshwater Lake (by area). And, because we’re surrounded by four of the five Great Lakes, Michigan has the longest freshwater coastline of any political subdivision in the world. So it’s no surprise that citizens of The Great Lakes State love creating massive, record-holding roadside attractions for us to enjoy—from the world’s largest Christmas store to the biggest front porch!

We rounded up some of our favorite unique “Biggest Things” in Michigan. Whether you’re looking for quirky stops to put on your next road trip or want to learn more about our state’s wacky side, you’ll find something that’ll pique your interest!

NOTE: Click the city link accompanying each destination to see its location and photos taken by curious visitors.

When you visit Northwest Michigan, you may be surprised when you stumble across not one, but two roadside pie tins that lay claim to the world’s largest cherry pie. It turns out that both Charlevoix and Traverse City, Michigan held the claim of “the world’s largest cherry pie” at some point. Charlevoix set the record in 1976 with a pie that weighed 17,420 pounds and Traverse City took over the record in 1987 with a pie that weighed in at 28,350 pounds—which garnered a Guinness World Record at the time. Unfortunately, the record is now held by Oliver, British Columbia, Canada, which created a 39,000-pound pie in 1990. But you can still see empty pie pans that marked both of Michigan’s momentous achievements proudly on display in each of the small towns. 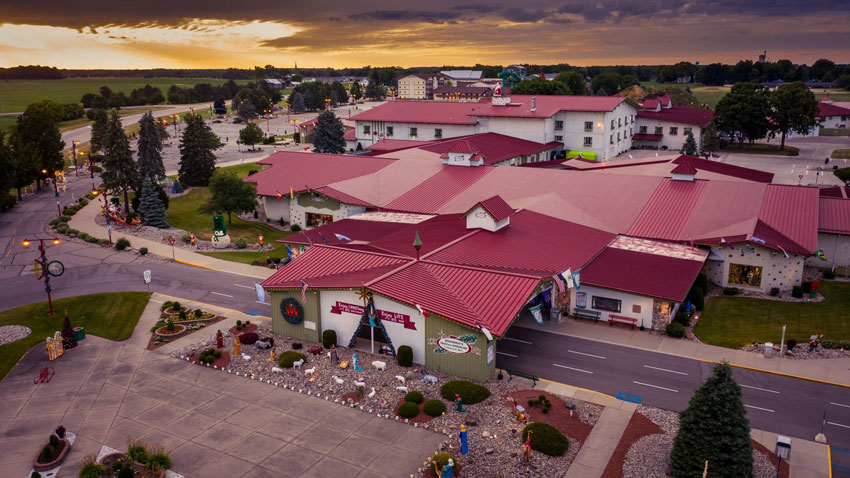 Michiganders love Christmas, it’s just a fact. So it’s no surprise that we lay claim to the largest Christmas store in the world—Bronner’s CHRISTmas Wonderland in Frankenmuth. This exciting holiday store fills 27 acres of Frankenmuth with serious holiday cheer all year long. Inside, you’ll find hundreds of thousands of Christmas lights, ornaments, trees and even more Christmas-themed goodies than you could ever imagine.

The Cross in the Woods in Indian River is a Catholic shrine that includes a 55-foot crucifix created by sculptor Marshal Fredericks. You can attend an outdoor or indoor service at the shrine, which is open to visitors every day of the year. And while you’re there, don’t miss the nun doll museum located nearby. 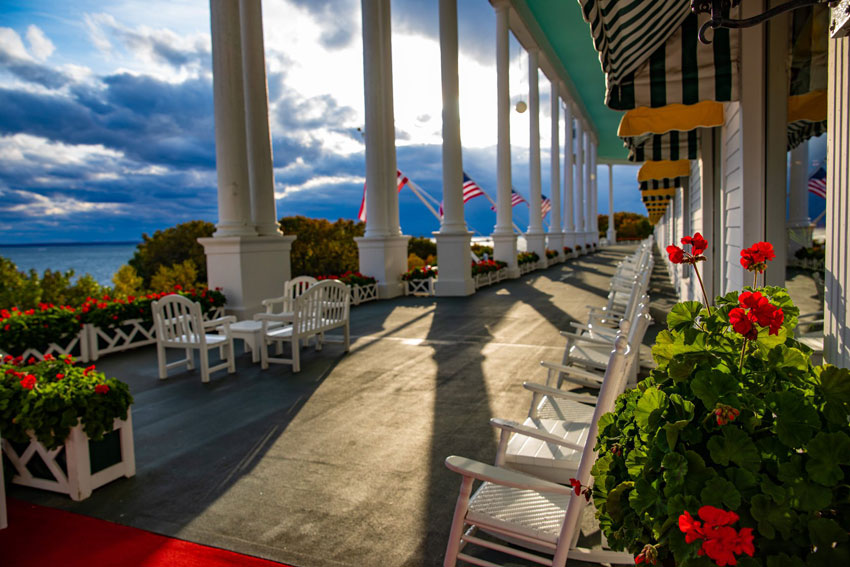 Photo courtesy of The Grand Hotel

The Grand Hotel’s iconic front porch offers one of our favorite views in all of Michigan. But it’s not only its special vantage point that makes this spot amazing—it also happens to be the longest front porch in the world! Measuring 660 feet long, this incredible sight is a must-see. For just $10, you can explore the front porch for yourself, enjoy a glass of champagne or a cup of tea and take in that expansive view of Mackinac Island from the comfort of one of their many rocking chairs.

If you’re a thrill-seeker, don’t miss Erebus: Haunted Attraction in downtown Pontiac—the former largest haunted house in the world! While this Michigan favorite lost it’s “world’s largest” title to a Texan haunted attraction in 2009, Erebus’ four-story “haunted house tower of terror” is still definitely worth a visit. The whole attraction offers more than a half-mile of indoor horror, packed full of creepy scenes, jump scares and so much more. Click here to buy your tickets—if you dare.

Granot Loma, the official name for the world’s largest log cabin, is located on the shore of Lake Superior in Marquette, Michigan. This massive cabin is made up of 13 buildings, 26,000 square feet, 50 rooms, a 3,000-gallon hot tub, a steam room, an indoor boathouse and so much more. And if you thought the house was great, wait until you see the 415-acre property that it sits on, complete with an apple orchard, its own wind turbine, a mile-long private beach, and even its own island. This beautiful, luxurious oasis isn’t open to the public but it is currently for sale. Click here to take a virtual tour of the property!

When Minor League Baseball came back to Lansing, Michigan in the mid-1990s, they chose “Lugnuts” as the local team name. While this name was controversial at the time, it has become pretty beloved and even inspired an oversized lug nut to be installed on top of a brick smokestack across the street from the team’s home field, the Cooley Law School Stadium. The massive silver installation supposedly weighs 5,000 pounds and can be seen from many areas surrounding the smokestack.

If you’ve ever seen a massive rubber tire on the side of I-94, you’ve actually witnessed the largest model tire in the world! Standing eight stories tall and weighing nearly 12 tons, the Uniroyal tire was originally a Ferris wheel made for the 1964 New York World’s Fair. After the fair was over, it was shipped to Allen Park where it has stoically sat ever since.

Grand Haven’s Musical Fountain isn’t technically the largest one in the world anymore, as it was usurped when the Fountains of Bellagio opened up at Bellagio Resort in Las Vegas, but it is still an incredible sight to see. This massive fountain was built in 1962 and offers stunning water and light shows that are created to popular tunes, which you can stream by listening to 88.7 FM while watching. The fountain isn’t currently in operation due to COVID-19, but you can follow the fountain on Facebook to see when they plan to resume performances.

Chi-Town Union Station in Commerce Charter Township is home to the largest O-scale model railroad. While there are definitely other scales of model trains around the world, no one beats the size of the O-scale track laid down in this rail museum, which is more than 12,000 feet long. While you’re there, don’t miss the World’s Longest Model Train (which is 1,112.06 feet in length!) that also resides at this interesting roadside attraction.

A post shared by Northern Michigan University (@northernmichiganu) on Aug 21, 2020 at 8:23am PDT

When exploring Marquette, you might find yourself looking at a massive, white wooden dome, nestled among the trees. That dome, often referred to as the “Yopper Dome”, is home to the Northern Michigan University football program and also happens to be the largest wooden dome in the world!

Ishpeming’s claim to fame is a massive rifle created by James A. DeCaine in 2008. This large rifle is over 33 feet long and weighs 400 pounds. It is currently located in the Da Yoopers Tourist Trap, a tourist attraction that offers interesting sights, funny merchandise and so much more. Coincidentally, Da Yoopers is also home to the World’s Largest Chainsaw—so do yourself a favor and knock both of these roadside wonders off your bucket list at one time.

The World’s Largest Weathervane soars more than 48 feet tall and was built in 1984 by White Metal Studios. It is topped by a 26-foot arrow and large sails that catch the wind and spin, providing a fun and exciting sight for the whole family! Currently, the weathervane is located in Ellenwood Park and has become an integral part of the city’s tradition, even inspiring local businesses to name themselves after it—including the extremely popular Weathervane Inn.

Everything is Bigger in Michigan!

Let us know which record-breaking destination you’d like to visit first in the comments below!

11 Socially Distanced + Virtual Events in the Ann Arbor Area to ...